How I made records for fun, profit, and one–to–five. 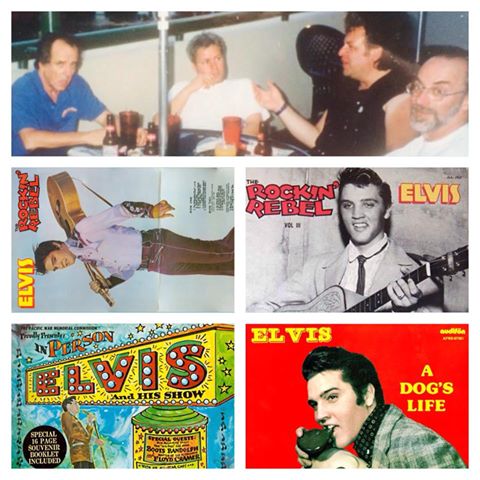 I slammed the car into reverse, lunged back down the alley, jammed it into drive, and sped away. Travis’ words were roaring in my ears: “Two guys in dark suits were here looking for you.”

TWO guys? I was almost flattered. I guess it was either get me or fight organized crime.

Traffic lights and intersections were a blur. Green lights, yellow lights, just–turned–red lights all looked the same; I was on the lam!

Two guys in dark suits? I almost wished I’d been there. Would they have yelled, “Take the needle off the record and step away from the machine with your hands in the air”?

Criminy, I wasn’t a drug lord; I ran a little record store. Oh, and I made Elvis Presley bootleg records for a few years before that. Okay, I grant you, legally I had no right whatsoever. But morally? Damn right! RCA, Elvis’ record company, had made it their policy to treat Elvis fans like petulant adolescents! (When’s the last time you listened to “Elvis Sings For Children and Grownups Too”? Ever waste your money on an RCA “Electronically Re–Processed” record? Ever buy an Elvis 8–LP set, discover four were warped, and be told the ONLY way to have them replaced was to mail them to RCA at YOUR OWN expense?)

I created QUALITY Elvis records! Full color covers, banded cuts, liner notes, true mono or stereo—and sold them at a very reasonable price. Conversely, while I was doing this, the best RCA could come up with was a previously unreleased version of “Beyond the Reef”—THREE YEARS after Elvis died!

Keep in mind, this was the very same company that, in 1959, THREW AWAY a warehouse full of their recording artists’ outtakes, including almost all of Elvis’ priceless ‘50s material! (Some fool RCA VP had decided they needed more shelf space!) All I did was take similar outtakes and create 23 classic Elvis albums! (I once read that when Elvis saw some he was quite amused.)

But, I bit Nipper and now he was biting back.

I checked the rear–view mirror for the hundredth time and changed lanes. Oh, the irony: I made records, I sold records, and suddenly the FBI wants to GIVE me a record.

It was December 9, 1982, my son Patrick’s eighth birthday, and I was in full getaway mode, tearing down the freeway in a beat–up station wagon filled with used records. All because “two guys in dark suits” had just changed everything forever.