The tale is told; the deed is done.

I got away from Elvis for many years after 1980. A new business to make prosperous, the demands of trying to be a good parent with children on the other side of the country, and a bad taste from a failed marriage that was partially due to letting the rigors of making records sometimes interfere with more important family issues, all played a part.

I retired in the 1990’s, spent a few years catching up on all the movies I’d missed and books I hadn’t read, and then started to write some memoirs. After a couple dozen college courses in literature and creative writing, it was time to set this story on the page. Now that the book is in reader’s hands, I have one more task to perform: I need to do some research in college archives.

My bootlegging days are behind me; they sure were fun. All this new technology with its multiple means of disseminating information just boggles the mind. So, keep your eyes on YouTube. If you ever see a video of Vic Colonna and four others singing gospel songs and sounding eerily like Elvis Presley and The Golden Gate Quartet, get out your tape recorders. We just might be lip–synching.

Three articles appeared in Billboard magazine about our arrest, trial, and conviction. In 1994, Clinton Heylin wrote, “Bootleg: The Secret History of the Recording Industry.” Both the Billboard articles and that book contain erroneous information. To set the record straight, I’ll tell you what they said that was incorrect; then I’ll tell you what really took place. Clinton Heylin has a number of interviews in his book. I wish he had contacted Paul and I. I am a stickler for accuracy. I wish I could write fiction; I couldn’t have made this stuff up if I tried.

We’ll give Billboard the benefit of the doubt: Billboard printed what people told them. It wasn’t their fault people lied; they had no way of knowing what the real truth was. Those that gave them information were seemingly credible. Not the type of people who would be untruthful, not any more so than your average senator or congressional representative. Clinton Heylin wasn’t up against a weekly deadline; this wasn’t breaking news. He had plenty of time to get it right. I wish that he had verified things about us. Here we go with, as the inimitable Paul Harvey would have said, “The rest of the story.”

In the June 18, 1983 Billboard is an article titled, Elvis Lives, Especially for the Pirates. Aca Anderson is reported to say that Paul and I were advanced $40,000 by Richard Minor to make 20,000 records. Richard would receive 10,000 LPs as a result. That means Richard paid us four dollars per album and gave us ten thousand albums for free. If only it was that easy! Richard never gave us a dime. We traded albums that one time.

Anderson goes on to say that Waddell’s refused to press any more records for us after the beginning of 1980 and that we sent the components needed to Richard Minor who then pressed the records in Florida. We never sent components to Richard; Waddell pressed all our records, right to the end. The one exception is noted when a record was pressed in Alhambra; that was the time I spent weeks replacing warped LPs.

Billboard has it all wrong regarding sentencing. However, Manny is as dysfunctional at passing judgment as he is at imitating a human being. Small wonder they were confused, the lawyers sure were. It took over an hour for the court reporter to figure it all out, and only after repeated trips to the inner sanctum.

Next is Uniontown, PA police officer John Herman. John claims he “loaned” Paul the tape for the “Rocking With Elvis New Year’s Eve” LP, then got a call from me asking if I could borrow the material from Paul and he refused. When he later found out a record had been made he was… Well, John, just what were you? You certainly were not surprised, since you were delighted that the tape you GAVE WILLINGLY to Paul was going to be used for a bootleg. You hoped it would be, that’s why you sent it. You never spoke to me about it and I never called you.

Harvey Zimmerman writes songs under the name Bill Giant. Harvey claimed that Paul lied to him. Harvey tells how he “answered an ad seeking Elvis material” from Paul and that Paul offered $3,000 with the promise he would hang the acetate on a wall. In actuality, Harvey called Paul because he had a rare Elvis promo he wanted to sell. Harvey and Paul had spoken to each other a number of times before. Paul had the promo in his collection, but another would be a good trade item. Harvey asked Paul to come up and visit. While there, the subject of the song “Plantation Rock” came up, Paul said he would like to buy the acetate, and Harvey sold it to him. Mr. Zimmerman knew we were going to put “Plantation Rock” on an LP.

No matter. These upstanding citizens had to cover their tracks after helping us lay down tracks for the fans that would delight. Paul Harvey could have told it better, but in the end he would have wished these people the same thing I do: “GOOD DAY.”

We turn now to the Clinton Heylin book, “Bootleg: The Secret History of the Recording Industry. The book came out in 1994; I had never heard of it before Glen Johnson, where would I be without him, told me of its existence. Glen knew it contained information about Paul and I, and he thought it might be helpful for the book I planned to write. I located a copy, turned to the index, and found references to Paul, Vic, the Audiofon label (should be Audifön), “Behind Closed Doors,” and myself. Wow! I couldn’t wait to see what was between the pages. We were famous! Or infamous. Either way, we were in a book, a book about the history of the recording industry. We were a part of history. While wondering how much I should charge for my autograph at the booths I would rent at Elvis conventions, Rock ‘n’ Roll conventions, and outside the Rock and Roll Hall of Fame during the annual inductions, I looked inside to see just what was written.

I soon discovered that Mr. Heylin didn’t cross–check all his research. There are, in the few pages that talked about our records and us, a number of things that are close to what took place, but not 100% accurate. I’ll only bother with one example: Heylin says that RCA, not Radio Recorders, threw away tapes and that a janitor found them and was “smart enough to take them home.” You’ll recall that the recording engineers split up the Elvis tapes that were headed for the dumpster behind Radio Recorders.

I don’t want to pick apart Clinton Heylin’s book. It is well written and I enjoyed reading it. I only wish that he had relied on Paul and I as primary source material when he wrote about our records and our career. He obviously got his facts from others; we were the only ones who could provide information that was completely accurate. The errors are not egregious; he captures the essence of the story. I just happen to be a stickler for accuracy. If you enjoyed this book then you will like that one also. 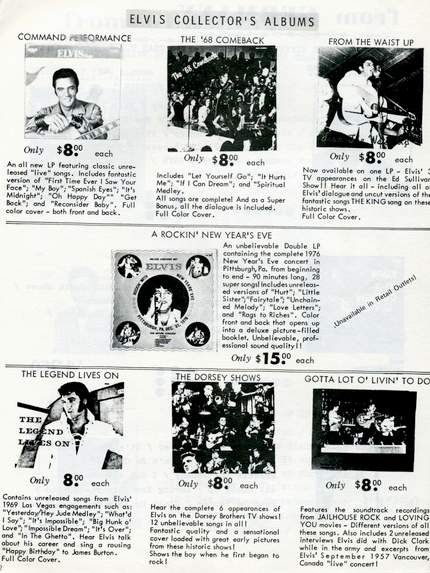 How to make a record

As Paul explained, having done this before, “The cover pictures need to be laid out; then a typesetter will place the wording atop the front and back covers. This gets presented to a photo lab that supplies you with a set of negatives (one for each color).” That was what I brought to the printer. Then there was the label: Again, typesetting and alignment (within the prescribed confines of that circle), another negative (this one easily done at the typesetters, since it did not involve photos), and a trip to a printer that specialized in labels. For the record itself, Paul prepared the “master tape.” I took that to a recording studio. There, an audio engineer played the tape, did some equalizing, and cut a master lacquer. Here, I could settle back and let the engineer work his magic: smoothing out rough spots, removing tics and pops, adjusting gain to make all the shows compatible in loudness when played, and generally making the best master possible from the material he had to work with. This record would then be delivered to a pressing plant; they would use it to make metal parts: fathers, mothers, and stampers. The master lacquer was positive (you could play it on a turntable like a record). The father was negative (if you played it on a turntable it would sound like the record was being played backwards), the mother positive, the stampers negative, and finally, from those, the positive records would be pressed. Confused? I sure was, but I got the hang of it quickly and much of it took care of itself.

Cover, disk, labels, and that was that, but not as easy as it sounds. The printer made “slicks” for the album cover; the sizing had to be exact. These printed sheets were then delivered to a fabricator, who glued them onto cardboard, trimmed and folded, and thus the finished covers. I delivered the covers and labels to the pressing plant. Quantity was another matter to be reckoned with. The initial order was 500 records, with hopes of selling them all and needing more. In the printing business, much of the cost revolves around setting up the job. Once the presses are rolling, the unit price drops dramatically. It cost less than half again as much to make 2,500 covers than it would have to simply make the 500 we needed. Also, “spoilage” came into play: The printer would charge for, and run through the presses, the number of sheets requested. But, it was a given that not every sheet would turn out perfect. Minor imperfections resulted in some sheets being discarded; up to ten percent was allowable and acceptable. Thus, ordering 2,500 covers actually meant we would have 2,250 to 2,400 good ones. The same went for the fabrication, so we actually delivered a little more than 2,200 covers to the pressing plant. Plenty for our needs then, but something that needed to be carefully factored in should demand grow: record orders could not exceed covers on hand so that was one more thing to keep track of. The same applied to the labels; I needed to make sure the pressing plant did not run out of those.

As with many processes, do something a few times and it becomes automatic. That certainly applied here; by the time we made our third record it had all become part of the routine. It did, however, require careful attention. Searching for typos, checking sizing and alignment, poring over pictures to be used on covers, writing liner notes, timing the songs so that bit of information could be included, and a myriad of other details meant hundreds of hours devoted to assembling a product that we were proud of, one that fans would enjoy. There is nothing more satisfying than the pride one feels in a job well done. Well, almost nothing, but that’s not a job unless you’re in the movie business.

That's The Way It Is