During that search, fate intervened; I chanced upon some unreleased Elvis material from the 1968 TV Special. This was a bootlegger’s dream: fans knew of it, thanks to Jerry Hopkins biography, “Elvis,” but RCA never released a note. A phone call to Brian Burney, wondering if he had anything new, revealed he had purchased some “test pressings” and was holding them for me. Test pressings are routinely made before the actual LP goes into production to verify accuracy; I expected to find something akin to white–label promos. What I was actually presented with was nothing like that.

Brian now had a record store in the exclusive Larchmont section of Los Angeles. I walked in, saw Brian was with a customer, and started to flip through the records in the bins. “Hi Sam.” and “Hi Brian” passed between us as another customer stepped up to the counter with his purchase. I continued looking at film and Broadway soundtracks that were of no interest to me; the mating dance continued. Finally, some twenty minutes later, Brian looked over and said, “I have those records in the back. Let me get them for you.” He returned a moment later and handed me three “acetates” that not only did not have labels, two of them were one–sided (Acetates, much thicker than vinyl, are records cut in the studio directly from tapes. They deteriorate rapidly after a few plays and are generally intended as a quick means to get a sample of material on record for a producer or bigwig to assess). In the dead wax area, where the label goes, written with white china marker, was: “Elvis I,” Elvis II,” on the one–sided exemplars, “Guitar Man/Elvis I” on the double–sided acetate. “These are interesting. What’s on them?” Brian replied, “I’m not sure, I haven’t played them.” He said something about the “Guitar Man” album. I nodded, knowingly, knowing one thing for sure: there was not any Elvis album titled “Guitar Man” (there would be, years later, one of those posthumous compilations). Brian actually had multiple copies of these acetates; where they came from did not occur to me at that time, but the answer would later astound. It should have been a simple matter to play these discs and see what they contained. However, Brian did not have a record player in the store. This, coupled with Brian’s complete lack of knowledge about rock—he specialized in soundtracks, show tunes, and classical—made “A–1 Record Finders” unique. I hemmed, hawed, yawed, and yawned, and tried to appear as uninterested as possible; I did my best to downplay their worth. “If only they had test pressing labels.” I moaned. I finally asked Brian to put a price tag on them. He thought for a moment, came back with ten dollars each, and I hesitantly agreed. I would like to think I took my time leaving; there was probably a dust cloud where I once stood. I bolted for the car, headed home to Glendale—the longest forty–five–minute drive of my life—and rushed into the house

I arrived shortly before eight o’clock, just in time to call Vicki, ask how she was doing, and say good night—it was August of 1975, a scant two years after we arrived in California; Vicki was back in Philadelphia showing off Patrick, then eight months old, to all her friends and relatives. That done, I went into the living room, turned on the stereo, and settled back to hear what I had found. I was listening to parts of the recording issued after Elvis’ triumphant return 1968 television special. This was a part studio (live before an audience of 300), part soundstage production that heralded Elvis’ return to center stage. For years he had been visible only in the movies; as they became staler, so did his image. The British Invasion relegated him to a rock ‘n’ roll footnote. Four years on, it was time to see if he still had drawing power. I also imagine it was time to make some money; his record sales were at an all–time low.

As I listened, I retrieved my copy of the RCA album. I remembered a medley from the show as: “Nothingville/Big Boss Man/Guitar Man” but this went straight from “Nothingville” to “Guitar Man.” I wondered if I was correct about the ordering of the songs; I would have bet the house that “Big Boss Man” was the middle part of this trio. Still, I opted to check. I found the album, headed back into the living room reading the track listing, and “Guitar Man” ended with a sudden switch to some calliope–like racket. Before I could begin to wonder what was going on, a sultry female voice began signing the opening verse of “Let Yourself Go” with a deliberately brazen, sexual innuendo. A couple lines later, Elvis came in. The arrangement was incredible, nothing like the lame version of this song heard in the movie, “Speedway.” I could not believe my luck; I was privy to the infamous “bordello scene” that had been planned as part of the TV Special but later snipped. (All because Col. Parker’s insisted his boy couldn’t be portrayed behaving in such an outlandish manner.) 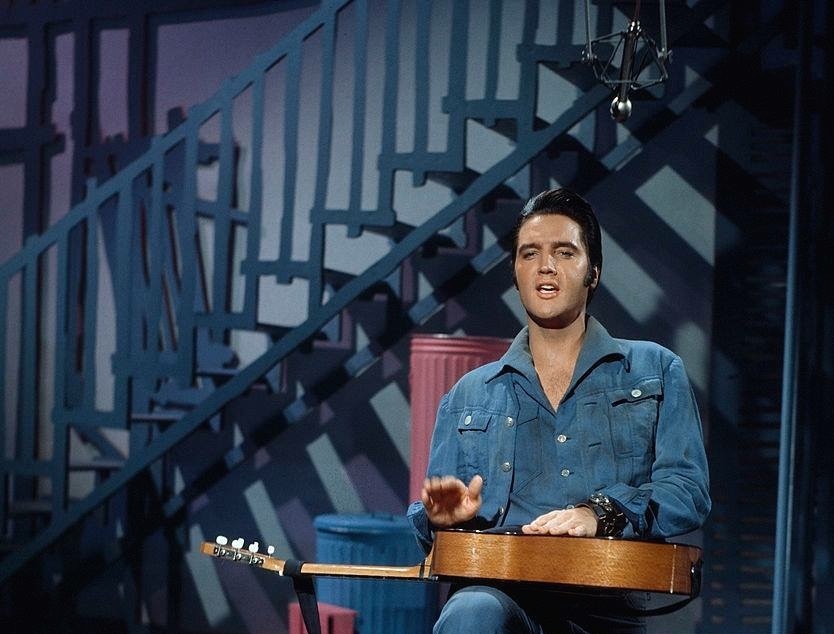 I had an unreleased Elvis song! Well, almost, there was that movie version. This was nothing like that; this was raw, vintage Elvis, the one that had set teenage boys’ lips curling and teen girls’ hearts thumping a dozen years before. This was it! I did just what you might have expected: first I sat down in the middle of the living–room floor, then I lay flat on my back holding the TV Special record straight above me, and I roared. And I laughed. And I cried out, “Yes, Yes, Yes!” I spent the next few hours calling all the Elvis fans and collectors I knew, playing for them what I had found. None complained. More than a few were already in bed, a few sounded a bit irksome when they answered the phone in the middle of the night; none were anything but ecstatic by the conclusion of the call. So goes the wacky world of Elvis devotees.

I had chanced upon the ultimate find and now I wondered if there could be more; more than that, I wondered just where this stuff came from? How did Brian ever get hold of these things? I asked Brian; he told me that a television executive who lived in Beverly Hills was transferring to New York and unloaded, rather than cart with him, his collection of classical records, eight thousand of them. Brian skimmed through the batch, determined they were worthy of purchase, and trucked them to his warehouse. Over the next few weeks while sorting and pricing he discovered, tucked in amongst Brahms, Beethoven, and Bach, these acetates. “Who was this guy?” I inquired. Brian told me his name was Bob Finkel. That name rang a bell. I pulled out the RCA album, looked on the back, and saw why the name sounded familiar. Robert Finkel was the executive producer of the ’68 TV Special. It all made sense: the original taping would be edited into the finished version of the show. Robert Finkel could not be present every minute, so acetates were made for him to critique at home. He must have stored them in his record racks, and that was that. Placed there years before, and then forgotten, was the only conclusion. Had he remembered, they would have been removed before he called Brian. Thanks for the memory lapse, Mr. Finkel. Thanks for thinking of me, Brian. Time to work out a deal with Paul Dowling.