I flew back to California; Glen and his friend drove back. I gave them money for expenses and paid them for their help. It was certainly going to be much more comfortable not having three people squeezed together in that truck. I had only been away a week, but orders had piled up. Robert and Vicki had processed all the mail and Robert had most of the orders packed and ready to go. There were a few dozen that needed my special attention: film orders could not be shipped until I got out to Hollywood Cine and picked up the prints. We had a steady stream of orders arriving daily, but it was nothing like what we had hoped for. At the end of April, when I figured an accurate accounting of the results of our huge mailing could be tallied, I calculated the response in the three to four percent range. That was over 5,000 orders, and we also received orders from our core list. New mailings went out whenever we amassed a sizable number of names from fan club lists or magazines. One of Paul’s tasks was to find new names; over the years he contacted virtually every fan club in the world.

The “Command Performance” LP would consist of decent quality songs from various audience tapes. We didn’t have anything else except that Hawaii Benefit Concert tape, and that was taboo. Or was it? It took the best part of the next month to put “Command Performance” together. We had one more “new” twist for this album. This was our seventh LP; we did something that still makes me smile. When you purchased an RCA Elvis album, the inner sleeve was festooned with pictures of his other albums. Above all those photos was the line, “Do you have these other great Elvis albums in your collection?” If it was good for the goose… When one took a gander at our inner sleeves they now proudly displayed pictures of our first six albums and the bold lettering above said, “Be sure you have theses great Elvis albums in your collection.

Flyers were sent out in mid–February, the LPs were ready at Waddell’s by the end of the month, and we started shipping the beginning of March. Our initial order was 5,000 copies now, enough to last for a while. After the glut of individual orders and wholesale shipments, we had almost a thousand left. Our list of dealers had grown considerably. Most were rather small, but they had standing orders for ten or more of any new release. Overseas orders, once a rarity, now numbered in the high hundreds and they were something only I could handle thanks to the customs tag requirements. Some countries just needed a small green tag affixed; Canada was like that. Europe, South America, and Asia had instructions as complicated as any contract ten lawyers drew up. There were two forms: one was a two–sided, stiff, cardboard manila tag that could be taped or tied on via a reinforced hole; the other was a one–sided, white, peel–the–back–off variety that glued on. Some countries got one or the other; some got both. Those incredibly long foreign addresses had to go on each form; and they went on both sides of the manila one. Each time we received an order from someplace new (to us) I felt a little twinge of satisfaction. We were truly worldwide by now, reaching places as small as Bermuda and Sri Lanka.

Ten months had passed between the “New Year’s” LP and “Command Performance.” We had done mailings offering new items, but the heart of our list wanted LPs. For some, the waiting became interminable. 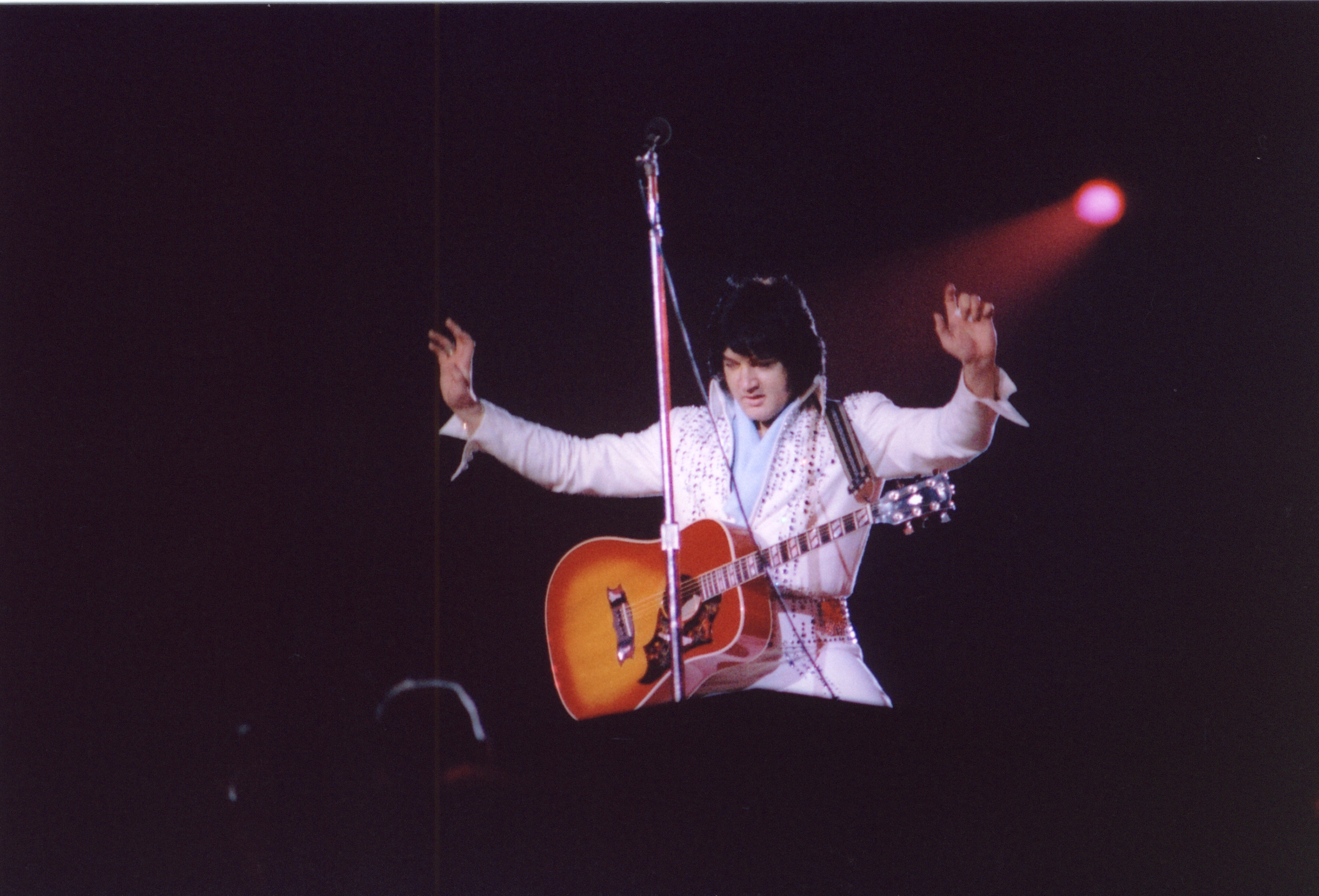 Leaving a legacy is something few get a chance to do. I had never thought about our doing it, but when all was said and done I think it is fair to say that we did. We touched some hearts and made life happier for Elvis fans. You don’t need the whole world to remember you. If you make your mark on just one person, change one life for the better, that’s the noblest thing you can ever do. It’s easy to be a celebrity; it’s harder to actually do something.

Two letters are forever inscribed in my mind. The first was from Caterina Passeri, who lived in Italy. I opened a letter from her in February 1978, when the “Command Performance” LP was in its initial stage of production. Flyers would not go out for another month. Caterina was always one of the first to order. She could not have known we were readying another album, but it had certainly been quite some time since the last one. I opened her envelope and $11 fell out; I pulled out her note and read, “In my small but far–reaching Elvis world, one thing stands true—Vic Colonna: quality, service, integrity. Please send me your next album.” Wow! That letter went on the wall and stayed there until we closed everything down. Caterina was tragically killed in a traffic accident before she reached thirty. I hope we made your short stay here just a little more pleasant, Caterina, and thanks for that wonderful letter.

The other one I will never forget was from the mother of a fellow who ordered every album and, after he heard it, sent a letter telling us how wonderful it was and how much he enjoyed it. The letters had detailed comments about all the tracks on the album. His mother’s letter requested that we no longer send any flyers because her son had passed away. She went on to say that he had been terminally ill and bedridden for a number of years. The only joy he had in the last years of his life were our albums. He played each one over and over and this helped push aside the constant pain he endured. When the first flyer arrived after he died she wept; mixed tears of grief and joy knowing he would not be able to hear what we now offered but remembering the pleasure he experienced. That one went on the wall also. My tears fell on the floor.

The “Command Performance” LP was out, the initial surge of orders filled, and we were just plain stuck. Paul had an idea for another album, but before that could happen we needed more material. Paul thought he could track down what we were looking for, but first we decided to ask “Cary” about putting out the Hawaii Benefit Concert. In May of 1977 Capitol Records put out an album titled, “The Beatles Live at the Hollywood Bowl.” The sound quality was not much better than the average bootleg. Audience noise sometimes drowned out the words to the songs. Capitol defended the release of this album, saying that it was historically significant. The album was in Billboard’s top ten for weeks. What could be of greater historical significance than one of the three live performances given by Elvis between 1957 and 1968? With that in mind, I contacted “Cary” and asked what he thought. He agreed that this material deserved to be heard by fans worldwide. With Elvis’ premature death, it was no longer something that should or could be withheld.

The more I thought about it, the more I felt that this was such a historic moment that a bootleg would not do it justice. Only a select few would be able to enjoy the concert if we released it. But what if RCA put out the album? That was how it should be done, and with that in mind I made an appointment with Joan Deary, the woman in charge of selecting the material for Elvis’ albums. I had only said, when I called, that I had some unreleased material of Elvis that RCA did not have, something fans would love to hear. She asked what it was and I replied, “I’ll tell you if you insist, but I would rather surprise you.” I went on to state I was certain that she would agree this album would be even more successful than the Capitol album, its only counterpart. I piqued her curiosity, and an appointment was made.

I had, of course, identified myself as Sam Theaker, not Vic Colonna. By that time, however, I had a hunch that RCA knew who Vic Colonna really was. When the meeting was over I was sure of it. In Nipper’s lair, when we came face to face, she reminded me of the stereotypical spinster schoolmarm. I was greeted by a puckered mouth, one that seemed to have just bitten a lemon, aquiline nose, hair pulled tightly back in a bun, black–rimmed glasses, utilitarian shoes. Joan was Dreary, and simply curious; I suspected she wanted to see this bootlegger fellow in person. Her reaction was less than tepid from the beginning; she was not the least bit enthused when I described the tape of the 1961 Hawaii Concert. She summoned an engineer, asked him to listen to the tape, and come back with his opinion. I explained that there were electrical problems at the beginning of the show, a fact Elvis himself noted, but that after a few minutes everything settled down and the concert was simply incredible. There was nothing to do but make small talk while waiting for the engineer to return; I asked Dreary Joan a few questions about upcoming releases. She had not a clue, acting as if this were a trivial matter that needed no discussion. Judging from RCA’s output from late 1977 to 1980 it is obvious that no one cared. There was a treasure trove of Elvis material waiting to be mined, but RCA was not interested in doing any digging. I talked about the success Capitol had had with their Beatles release, and how I was sure RCA could top that with an album of this magnitude.

The engineer returned, tersely remarked that the quality of the recording was not up to RCA’s standards, and placed my tape on Joan’s desk. The engineer left, I sat there stunned, and Joan said, “Well, I guess that’s it, then.” “Wouldn’t you like to listen to it yourself?” I asked. Apparently not. She made some sort of facial expression midway between a smirk and a smile and I could tell this was going no further. Not with RCA. Fans worldwide would not have the pleasure of hearing this concert, but a handful of dedicated Elvis fans, those on our mailing list, would not be denied. It was time to set the wheels in motion for a new album once more. This album would be unlike any other; it would not just surpass, but put to shame, any bootleg ever created. Paul had some wonderful ideas, and we went to work on our most ambitious project ever.

The effort we put into this album was far greater than any other. This one was a labor of love. We were determined to show RCA up, no doubt about that. I was not only amazed at how little consideration was given by RCA to releasing this album; I was just plain miffed. It was obvious that what the fans wanted did not matter. Not to RCA. They did to us.

I’ll go back to see Joan one more time; she’ll be holding all Aces. You know who will win the hand. For now it was time to find out everything there was to know about that day in Hawaii, the events leading up to it, and the aftermath. Who would ever have suspected that I’d find long–lost Uncle Morley?